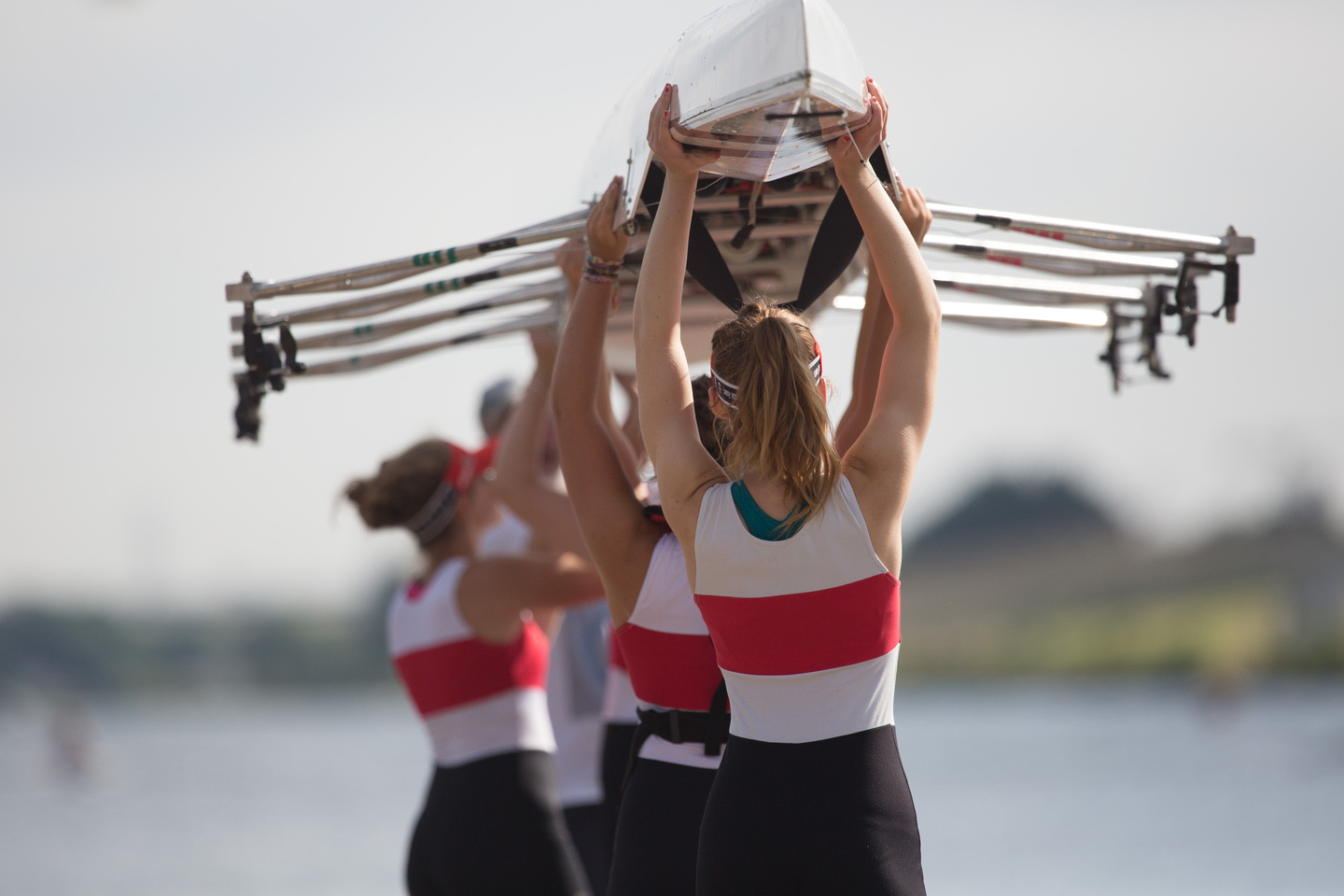 Eva raced in two divisions with her partner from Durham AC (Gill Prescott) . The first race was in WMas E/F 2x and after touching the bridge with the blades going through the bridge they won in 8.14min ((7.16.3 ajusted time). Their second race was in the WMasC/D 2x and they had a faster row of 8:08.8min (7:39.9) ajusted time) and also won. Well done!

Eva Rankin went to the Rutherford Head on the Tyne and she WON the W Masters C/F/D 4x in a composite with Durham (Gill, Chris, Joyce). The time was 20.53.5min (19.03.8 adjusted time to handicap) over a 4.5km course against the tide and against the stream. Laura McKenzie, now rowing for Glasgow Uni had a win in the 1st division in the W4- in Band 2.WELL DONE

Michale Yeomans and Fiona Davidson were rowing in the Vets 4’s Head in London on the Thames, winning the Mixed Masters A-C 4x (5km) in a composite crew with the Royal Air Force – 20:40min.The race is raced on the ebb tide from the University Stone, Mortlake to Ranelagh Sailing Club, Putney.

1st place for the WJ18 team with Eilidh McGowan, Jessica McQueenn, Martha Coombes and Freya Buchanan. 2nd Place for Lynn Buchanan in the Lwt over 50 – her 1st indoor competitionIn the WJ18 we had a 4th (Eilidh), an 8th (Martha), a 9th (Freya) and an 11th (Jessica) place.

WJu 18 girls, Eilidh McGowan, Martha Coombes, Jessica McQueen, Rhona Mackinnon, Feya Buchanan competed in the Ju18 4x and in the Nov4+. They were 2nd in both. Eva was in an R2 4x+ in a composite with Castle Semple and was 2nd too. The conditions were lovely!

In the doubles, Jessica and Eilidh were 2nd in the WJ18 2x and so were Lachlan and Euan in the J18 2x.

Great result for Eva and Gill Prescott (Durham RC) winning the Women’s Masters F/G event at the Pairs Head, fastest of 7 in their category, 37 seconds ahead of the next fastest and 307th overall out of 418 finishers

Monster the Loch is the first mass participation boat race on Loch Ness. All human powered types are invited to race, but as the weather and the Monster can be unpredictable the boats must be sea worthy.The Loch is 21miles long and 1 mile wide. A large fleet of over 60 crafts of various shapes and sizes with around 270 participants took part in this event. The race run from Fort Augustus to Dores.Eva was part of a crew of 6 in the sea-worthy ‘Swift’ – Hazel Smith and Hazel Gaddis from Inverness RC, Robert Young from St Andrew RC, Ailie Ord and Laura Graham from SPRC, who swapped over at the halve way point. It started of nice and calm, but the waves got higher and higher to the point were the waves were swamping the boat and the rowers and they had to stop every 1500m to bail it out. For the last 5km they were a man down after the waves were strong enough to snap a poor crewmate’s blade.

It was only Eva from LLRC who ventured to Hungary for the World Masters Rowing Regatta. The conditions for the regatta were brilliant with glorious sunshine and mostly calm water.The regatta attracted over 5000 entries representing 52 countries and concluded on Sunday with 89 mixed races. Because of the large number of entries races started every 3 minutes during the regatta, meaning no progression system through heats, semi-finals and finals, so all races were in effect finals with medals awarded to the winner of each race. Competitors at the regatta ranged in age from 27 to 93 and competed in races grouped by those nearest in age. Eva came away with two wins – WF2x with Ailie Ord (SPRC) and Mixed G2x with John Appelby (Durham RC).

﻿She also had 4 second places (WF1x, WG4x, WF4x, Mixed G4x) and two third places. It was a very well organised regatta with superb facilities and plenty of staff on hand when needed.

Laura and Lily were invited to compete for Scotland in the Home Int. Regatta!

6 juniors went to Nottingham to compete against the rest of Great Britain in their age groups.We have a BRITISH CHAMPION in the WJ18 4- Laura McKenzie! After winning the Semi Finals (8:00.06), Laura in a composite WJ18 4- with Inverness and St Andrew WON the ‘A’ final (8:19.77) – GOLD MEDAL!

Eilidh McGowan was 13th in the time trial, just missing out by one place for the A, B semi finals. She was 1st in the ‘C’ final.

Eva was the only Master rower from LLRC venturing to the Henley Masters. It is the same course than the Royal or Women’s Henley Regatta, just a bit shorter – only 1000m WG 2x Eva with Birgith Sims (Kingston RC) – won the semi finals against Twickenham and won the final against San Diego RC by 41/2 lengthsWF 2x Eva with Ursula Tanner (Ardenly RC) – won the semi finals against TauntanRC/French, but lost the final against Chinnock Performance RC from USA

Both made it through the time trials (fastest 16) and Lily’s quad was beaten by LeaRC in the heats.Laura’s 4 – won their heat against Cantabrigian RC and won the quater final against Vesta RC, but unfortunately were just beaten by Thames RC in the Semi finals.﻿

The weather was a bit crazy and you got 4 seasons in one day – sun, rain, thunde and a lot of wind.444 crews from 81 clubs competed including our LLRC masters, Eva, Fiona and Michael.The result was: Gold in WMasF 2x for Eva Rankin and Gill Prescott (Durham)Silver for Eva,Gill and Helen from Durham and Sue from X-Press in a composite in WMasD/E 4x-2nd Place for Fiona Davidson and Michael in a composite with RAF in Mixed C4x.

Loch Lomond RC had a strong team at Lochwinnoch with several 1st places and lots of 2nd and 3rd places!

Eva Rankin of Loch Lomond and Gill Prescott of DARC achieved a notable double success over the weekend. After winning the WMasF 2x at Durham City Regatta on Saturday they headed off to Nottingham to race again over the 1000m course at a very placid-looking Holme Pierrepont on Sunday in the Nottingham City and Masters Regatta, beating Henley RC to win the band 1 WMasF 2x (4:12.6)and then teaming up with Birgith Sims and Caroline Willet from Kingston RC to win the band 1 WMasE 4x- (3:54.5), this time beating Eton Excelsior and Henley.

Fiona Davison and Michael Yeomans (rowing for the RAF) also competed at the Nottingham masters, in a mixed C double (4:17.8), just loosing to the Broadland/Yarn crew and in a mixed C quad (4:02.0), having to give Runcorn a head start since they were Masters D. Well done Fiona in racing in England for the first time.

Sunday’s weather was a lot better, more sunshine and less wind and waves

5000m downstream on the River Ouse from Rawcliffe Landing to Lendal Bridge, in the heart of York. Eva again was in a composite Master F quad with Gill (Durham), Jacky (Barns Bridge) and Lisa (Mortlake Anglian&Alpha). The quad won the masters event in 21.34.3min (adjusted handicapped time – 20.43.3min). They were 64th overall, from 167 boats (from all age groups and 8’s and 4’s and 2’s) with their raw time.

Most of our Juniors headed to Glasgow for the 4km head race.

In the 1st Division Euan and Lachlan had a great row in the J16 2x (15.01min), but unfortunately they did not have any opposition.

With a nearly blue sky, but very cold and frosty, Eva won the W2x (Band1) with her double partner Gill Prescott (DurhamAC). Since there were no other Women Masters, Eva and Gill had to row in the     W Elite with no handicap given and they still managed to beat the youngsters. Well done!